Skip to content
The Asteroid Society > Recent News > All > Asteroid Day: Monitoring the skies for the next strike

(CNN)Friday is International Asteroid Day. A 24-hour live broadcast will include everything you’ve ever wanted to know about these rocky bits of space debris, the threats they may pose to Earth and what we can gain from studying them.

You can tune in live or find events near you.
The date commemorates the Earth’s largest recorded asteroid impact in 1908 when a powerful asteroid struck the Podkamennaya Tunguska River in a remote Siberian forest of Russia. The event leveled trees and destroyed forests across 770 square miles, or three quarters of the state of Rhode Island. The impact threw people to the ground in a town 40 miles away.
Four years ago, an asteroid entered Earth’s atmosphere over Chelyabinsk, Russia. It exploded in the air, generating brightness greater than the sun, exuding heat, damaging more than 7,000 buildings and injuring more than 1,000 people. The shock wave broke windows 58 miles away.
It was undetected because it was coming from the same direction and path as the sun. And it explains why astronomers and the Asteroid Day group want people to be aware.
Asteroid Day was created by Brian May, an astrophysicist better known as co-founder and lead guitarist of the rock band Queen, to bring awareness and educate the world about asteroids in 2015. Co-founders include film director Grigorij Richters, astronaut Rusty Schweickart and Danica Remy, chief operations officer of the B612 Foundation, a nonprofit to protect Earth from asteroids through early detection.
The United Nations sanctioned it in 2016 as a global day of education to raise awareness. Last year, the organization launched the 100X Declaration, calling to increase the asteroid discovery rate 100 times — to 100,000 — within the next decade. To date, 22,000 people have signed it.
Asteroid Day has grown in other ways. In 2015, there were 50 public events. More than 700 are planned this year in 190 countries.
“It’s about global awareness of something that is globally important,” said astronaut Nicole Stott, who will speak at the main event in Luxembourg. “Everything about today is intended to facilitate international cooperation and unity in response to something that could impact us all.”

Asteroids and the Earth

So what are the odds of an asteroid striking the Earth?
“One hundred percent — asteroids hit the Earth every day,” said Dante Lauretta, principal investigator on NASA’s OSIRIS-REx mission.
“Most of them are small particles that burn up in the atmosphere. On average, multiple car-sized asteroids hit the Earth every year. However, most of the small asteroids that hit the Earth are undetected before collision. A Tunguska-scale event occurs every few hundred years on average.”
The three asteroids with the highest probability of affecting the Earth are: 29075 (1950 DA), 101955 Bennu (1999 RQ36) and 410777 (2009 FD). NASA keeps a list of all potentially hazardous asteroids.
“It’s a matter of size,” said Alan Fitzsimmons, astronomer at the Queen’s University Belfast Research Centre. “Very dangerous large asteroids of diameter 1 kilometers or larger only hit us every half a million years or so. But as there are many smaller asteroids, they hit us more often. An asteroid 18 meters across similar to the one that hit Chelyabinsk four years ago may come in every 20 or 30 years.”
NASA operates a series of asteroid survey programs that scan the skies whenever possible to identify potentially hazardous asteroids, Lauretta said.
The Catalina Sky Survey at the University of Arizona has found two asteroids in advance of them colliding with the Earth.

This year, Asteroid Day also coincides with the 100-day marker leading up to when OSIRIS-REx will receive a gravity assist from Earth’s orbital energy to send it out into space.
NASA’s OSIRIS-REx space probe will spend two years flying through space to catch up to an asteroid named Bennu, a big, roundish space rock that has made it onto NASA’s list of potentially hazardous asteroids. That means Bennu is one of the most dangerous space rocks we know of because it could one day collide with Earth. It launched in September. 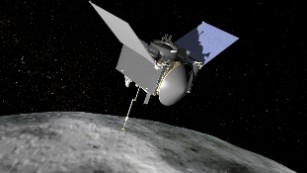 Why is NASA chasing this asteroid?
Missions such as this one, along with other programs at NASA, are informing researchers about asteroids in new ways.
“NASA runs the Near-Earth Object Observation program, which … is dedicated to finding hazardous asteroids and identifying ways to mitigate potential impacts,” Lauretta said.
“The OSIRIS-REx mission is developing critical technologies for rendezvous and study of near-Earth asteroids. These capabilities are essential for any future asteroid mitigation mission.”
Other planned NASA missions to asteroids include Psyche, launching in 2022 to reach a unique metal asteroid, and Lucy, launching in 2021 to visit asteroids around Jupiter. 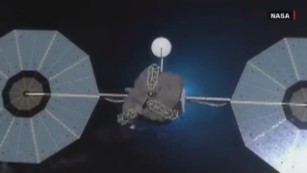 Asteroid to orbit Earth’s moon? 01:48
Researchers at NASA’s Advanced Supercomputing Division are also at work on the Asteroid Threat Assessment Project, using simulations and probable risk models to estimate damage caused by a potential asteroid strike. They share their findings with other agencies and teams to come up with a plan for the worst-case scenarios.
But ultimately, there is no plan to stop an asteroid if it’s coming toward Earth.
“Both NASA, (the European Space Agency) and individual teams like the European NEOShield-2 project have worked on proposals to test our ability to move an asteroid and prevent an impact,” said Fitzsimmons of the Queen’s University Belfast Research Centre.
“Yet although the USA and Europe have recently come close to approving such a mission, funding and possibly politics have prevented this test to date. It is frustrating, knowing that we might have the ability to prevent a natural disaster, but not being able to work on it further.”