Skip to content
The Asteroid Society > Recent News > All > Asteroid attack? Astronomers ponder fourth close pass of 2017
UP NEXTSee the swirling spirals of Mars’ crazy north pole
Autoplay: ON
For the fourth time since the start of 2017, a small celestial body will pass closer to Earth than the distance between us and the moon. Recently discovered asteroid 2017 BS32 zips by around midday Thursday.

This latest narrow shave comes just a few days after the closest such flyby in months, prompting observers and some astronomers to wonder if the apparent blitz of tiny planetoids could be more than mere coincidence.

According to astronomer Paul Cox at the Slooh observatory, the apparent bursts of small, close-approaching asteroids were first spotted just before buzzing us initially sparked discussion in 2016.

“One possibility sprang to mind — that these clusters of smaller asteroids making close approaches to Earth over relatively short periods of time were in fact the fragments from larger asteroids that had broken up,” Cox said via email. “However, when we reviewed the orbits of each of the asteroids, we found no correlation between them — showing clearly they weren’t associated in any way.” 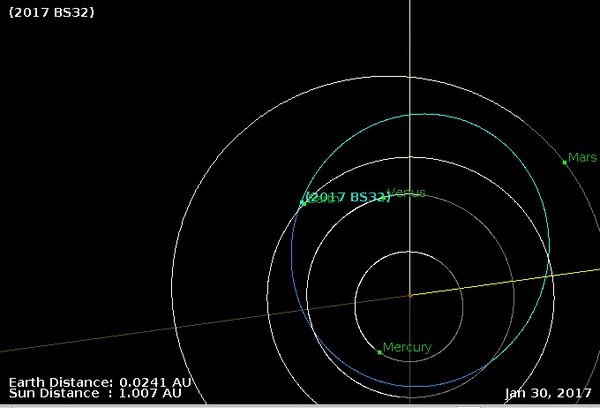 Cox said the scientists also looked for a connection to seasonal changes or to weather at observatories that might reduce discoveries of nearby asteroids, but there was no conclusive data to be found.

“So we were certainly left with the opinion that these small clusters are purely coincidental,” he said. “Having said that, they still surprise us when we see them.”

An asteroid apocalypse isn’t upon us, it would appear. As far as we know, all these last-minute discoveries from the past year or so have flown by us safely without incident.

Slooh will be live-streaming the pass of 2017 BS32, which you can watch below or at Slooh.com, where you can also chat with astronomers and control some of the telescopes yourself.