Skip to content
The Asteroid Society > Recent News > All > Are Mass Extinctions Periodic? If So, Are We Due For One? 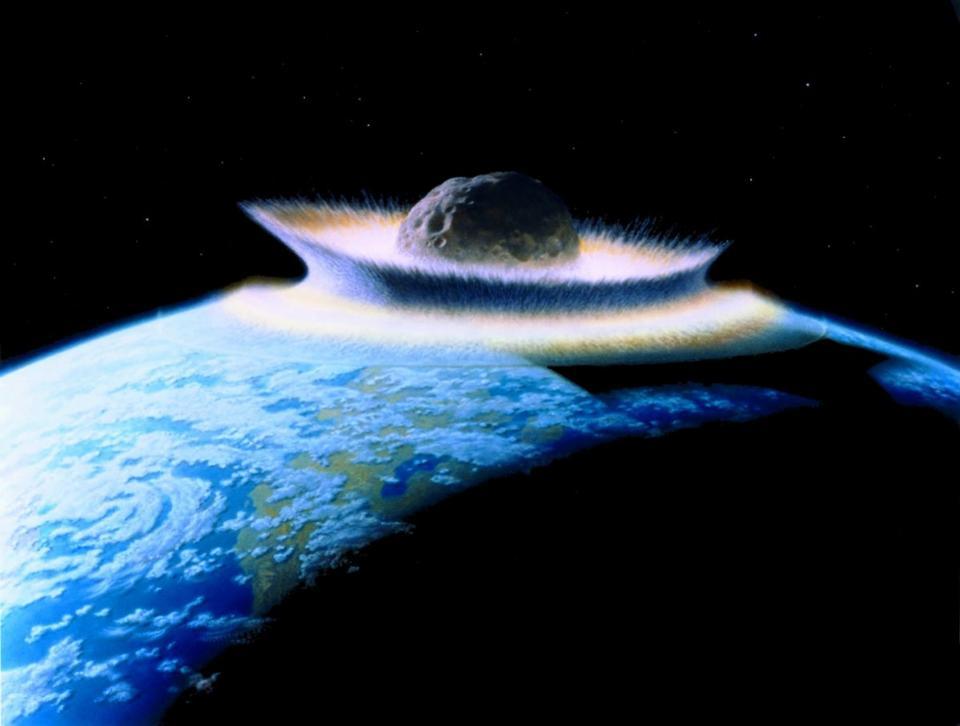 A large, rapidly moving mass that strikes the Earth would be certainly capable of causing a mass extinction event. However, such a theory would require strong evidence of periodic impacts, which Earth doesn’t seem to have.

65 million years ago, a massive asteroid, perhaps five to ten kilometers across, struck the Earth at speeds in excess of 20,000 miles per hour. In the aftermath of this catastrophic collision, the giant behemoths known as the dinosaurs, which had dominated the Earth’s surface for over 100 million years, were exterminated. In fact, around 30% of all species currently existing on Earth at the time were wiped out. This wasn’t the first time Earth had been struck by such a catastrophic object, and given what’s out there, it likely won’t be the last. An idea that’s been considered for some time is that these events are actually periodic, caused by the Sun’s motion through the galaxy. If that’s the case, we should be able to predict when the next one is coming, and whether we’re living in a time of severely increased risk.

Getting hit by a giant piece of fast-moving space debris is always a danger, but the danger was greatest in the early days of the Solar System.

There’s always a danger of a mass extinction, but the key is quantifying that danger accurately. Extinction threats in our Solar System — from cosmic bombardment — generally come from two sources: the asteroid belt in between Mars and Jupiter, and the Kuiper belt and Oort cloud out beyond the orbit of Neptune. For the asteroid belt, the suspected (but not the certain) origin of the dinosaur-killer, our odds of getting hit by a large object significantly decrease over time. There’s a good reason for this: the amount of material in between Mars and Jupiter gets depleted over time, with no mechanism for replenishing it. We can understand this by looking at a few things: young Solar Systems, early models of our own Solar System, and most airless worlds without particularly active geologies: the Moon, Mercury and most moons of Jupiter and Saturn.

The highest-resolution views of the entire lunar surface were taken recently by the Lunar Reconnaissance Orbiter. The maria (the younger, darker regions) are clearly less cratered that the lunar highlands.

The history of impacts in our Solar System is literally written on the faces of worlds like the Moon. Where the lunar highlands are — the lighter spots — we can see a longstanding history of heavy cratering, dating all the way back to the earliest days in the Solar System: more than 4 billion years ago. There are a great many large craters with smaller and smaller craters inside: evidence that there was an incredibly high level of impact activity early on. However, if you look at the dark regions (the lunar maria), you can see far fewer craters inside. Radiometric dating shows that most of these areas are between 3 and 3.5 billion years old, and even that is different enough that the amount of cratering is far less. The youngest regions, found in Oceanus Procellarum (the largest mare on the moon), are only 1.2 billion years old and are the least cratered. 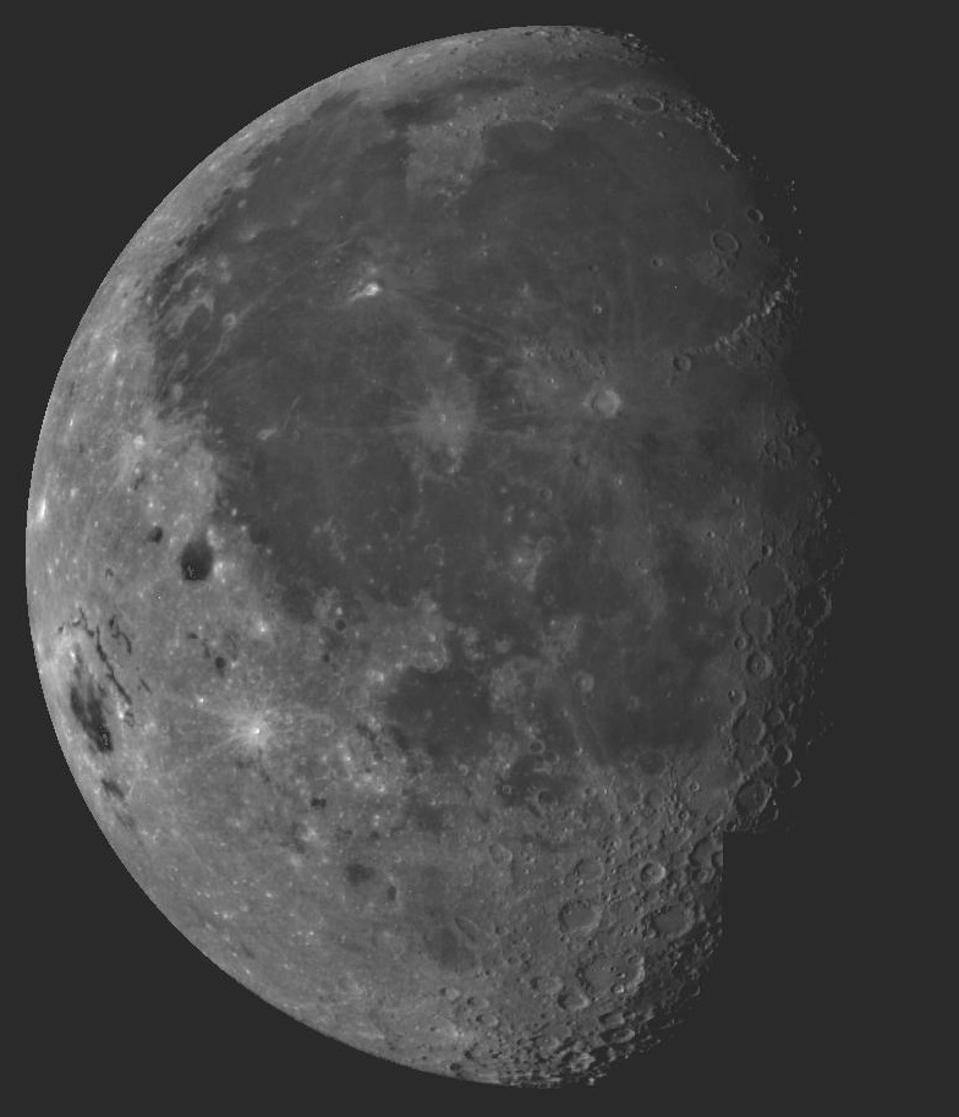 The large basin shown here, Oceanus Procellorum, is the largest and also one of the youngest of all the lunar maria, as evidenced by the fact that it is one of the least cratered.

From this evidence, we can infer that the asteroid belt is getting sparser and sparser over time, as the cratering rate drops. The leading school of thought is that we haven’t reached it yet, but at some point over the next few billion years, the Earth should experience its very final large asteroid strike, and if there’s still life on the world, the last mass extinction event arising from such a catastrophe. The asteroid belt poses less of a danger, today than it ever has in the past.

But the Oort cloud and the Kuiper belt are different stories. The Kuiper belt is the location of the greatest number of known objects in the Solar System, but the Oort cloud, fainter and more distant, not only contains many more, but is more likely to be perturbed by a passing mass like another star.

Out beyond Neptune in the outer Solar System, there’s tremendous potential for a catastrophe. Hundreds of thousands — if not millions — of large ice-and-rock chunks wait in a tenuous orbit around our Sun, where a passing mass (like Neptune, another Kuiper belt/Oort cloud object, or a passing star/planet) has the potential to gravitationally disrupt it. The disruption could have any number of outcomes, but one of them is to hurl it towards the inner Solar System, where it could arrive as a brilliant comet, but where it could also collide with our world. 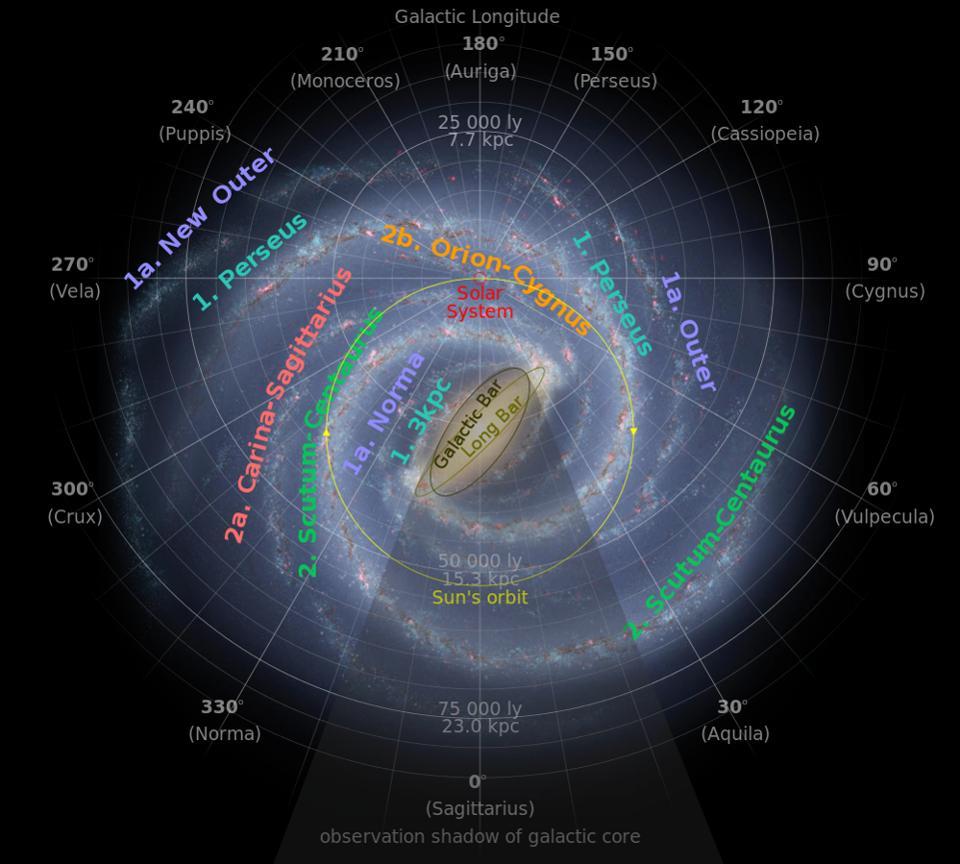 Every 31 million years or so, the Sun moves through the galactic plane, crossing over the region of greatest density in terms of galactic latitude.

The interactions with Neptune or other objects in the Kuiper belt/Oort cloud are random and independent of anything else going on in our galaxy, but it’s possible that passing through a star-rich region — such as the galactic disk or one of our spiral arms — could enhance the odds of a comet storm, and the chance of a comet strike on Earth. As the Sun moves through the Milky Way, there’s an interesting quirk of its orbit: approximately once every 31 million years or so, it passes through the galactic plane. This is just orbital mechanics, as the Sun and all the stars follow elliptical paths around the galactic center. But some people have claimed that there’s evidence for periodic extinctions on that same timescale, which might suggest that these extinctions are triggered by a comet storm every 31 million years. 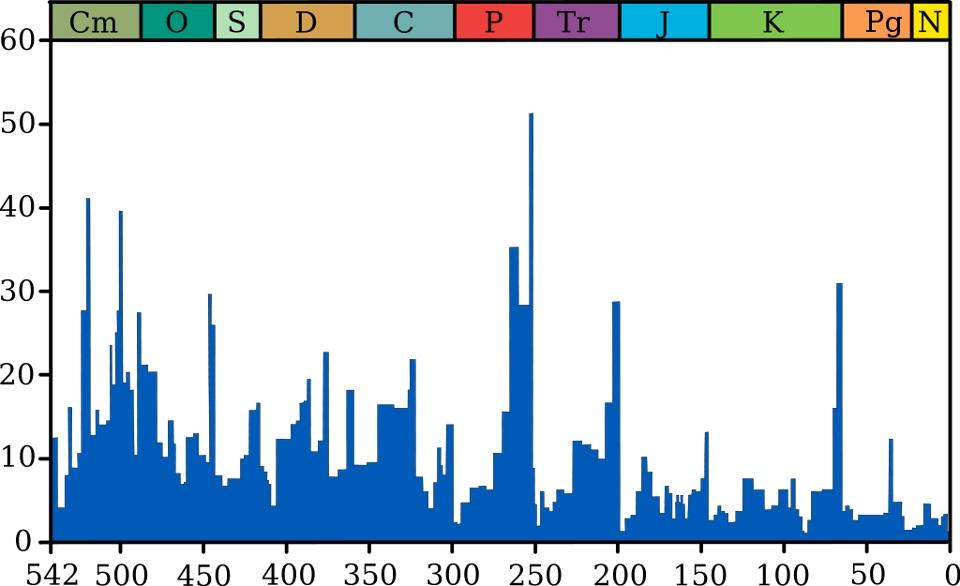 The percentage of species that have gone extinct during a variety of time intervals. The largest known extinction is the Permian-Triassic boundary some 250 million years ago, whose cause is still unknown.

Is that plausible? The answer can be found in the data. We can look at the major extinction events on Earth as evidenced by the fossil record. The method we can use is to count the number of genera (one step more generic than “species” in how we classify living beings; for human beings, the “homo” in homo sapiens is our genus) in existence at any given time. We can do this going back more than 500 million years in time, thanks to the evidence found in sedimentary rock, allowing us to see what percent both existed and also died off in any given interval.

We can then look for patterns in these extinction events. The easiest way to do it, quantitatively, is to take the Fourier transform of these cycles and see where (if anywhere) patterns emerge. If we saw mass extinction events every 100 million years, for example, where there was a big drop in the number of genera with that exact period every time, then the Fourier transform would show a huge spike at a frequency of 1/(100 million years). So let’s get right to it: what does the extinction data show? 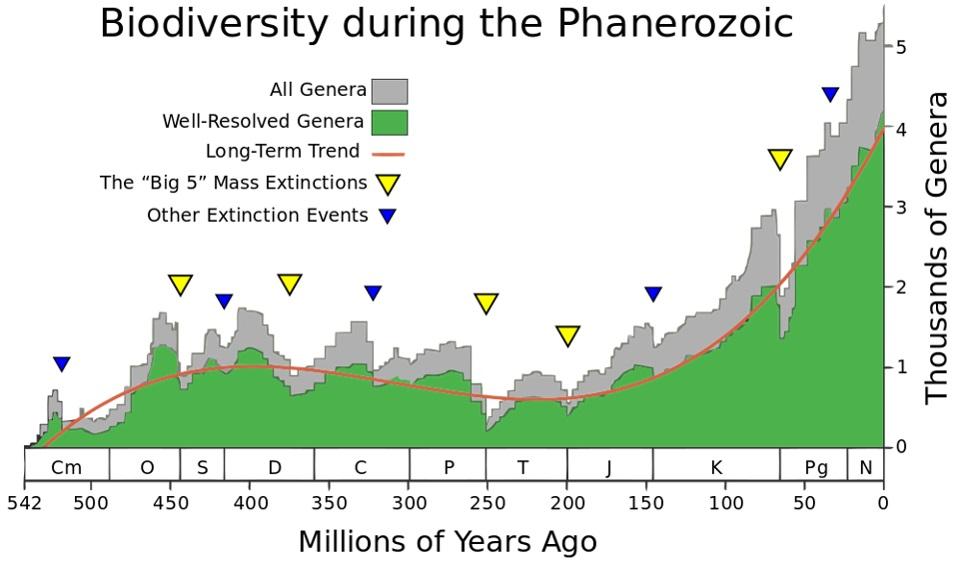 A measure of biodiversity, and changes in the number of genera that exist at any given time, to identify the most major extinction events in the past 500 million years.

There is some relatively weak evidence for a spike with a frequency of 140 million years, and another, slightly stronger spike at 62 million years. Where the orange arrow is, you can see where a 31 million year periodicity would occur. These two spikes look huge, but that’s only relative to the other spikes, which are totally insignificant. How strong, objectively, are these two spikes, which are our evidence for periodicity? 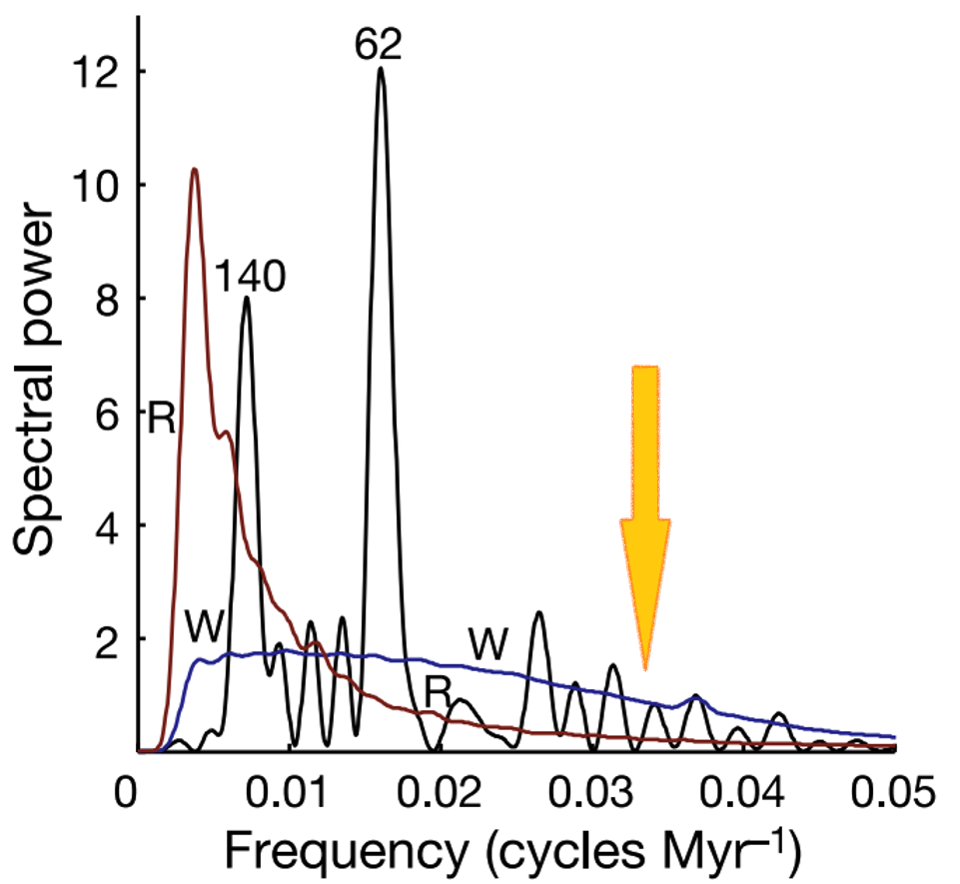 This figure shows the Fourier transform of extinction events over the past 500 million years. The orange arrow, inserted by E. Siegel, shows where a 31 million year periodicity would fit in.

If we start looking at the craters we find on Earth and the geological composition of the sedimentary rock, however, the idea falls apart completely. Of all the impacts that occur on Earth, less than one-quarter of them come from objects originating from the Oort cloud. Even worse, of the boundaries between geological timescales (Triassic/Jurassic, Jurassic/Cretaceous, or the Cretaceous/Paleogene boundary), and the geological records that correspond to extinction events, only the event from 65 million years ago shows the characteristic ash-and-dust layer that we associate with a major impact. 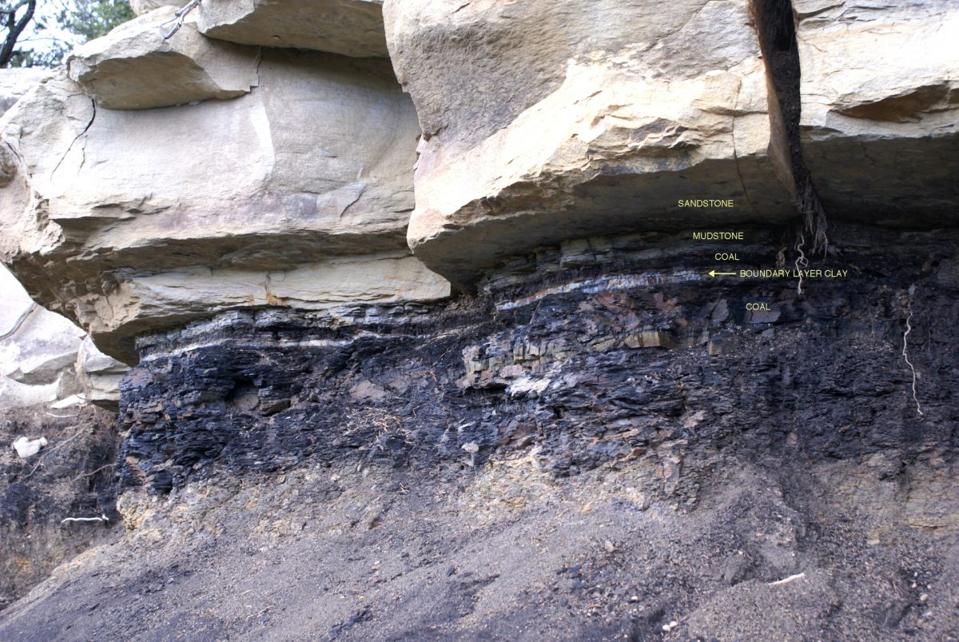 The Cretaceous-Paleogene boundary layer is very distinct in sedimentary rock, but it’s the thin layer of ash, and its elemental composition, that teaches us about the extraterrestrial origin of the impactor that caused the mass extinction event.

The idea that mass extinctions are periodic is an interesting and compelling one, but the evidence simply isn’t there for it. The idea that the Sun’s passage through the galactic plane causes periodic impacts tells a great story, too, but again, there’s no evidence. In fact, we know that stars come within reach of the Oort cloud every half-million years or so, but we’re certainly well-spaced between those events at present. For the foreseeable future, the Earth isn’t at increased risk of a natural disaster coming from the Universe. Instead, it looks like our greatest danger is posed by the one place we all dread to look: at ourselves.

Astrophysicist and author Ethan Siegel is the founder and primary writer of Starts With A Bang! Check out his first book, Beyond The Galaxy, and look for his second, Treknology, this October!